To find a great education, one does not necessarily need to attend a top ranked ivy league school.

In fact, many of the top schools in the country can be found at institutions that are not household names.

Sure, these are certainly fine schools.

But did you know that there are nearly 1,100 accredited engineering programs in the US alone?

In our guide to these amazing gems, we seek to highlight the best of the 1100 programs on par with any traditionally ranked school.

What qualifies as a hidden gem?

We are highlighting schools here that are not in the top 70 of the US News and World Report list of best universities as of August 1st, 2019.

Here are 10 amazing engineering schools as good as the Ivies…

Their Kate Gleason College of Engineering is named after the “(Marie) Curie of machine tools,” who graduated from Rochester in the 1880’s.

More recently, Rochester graduate Patricia Moore disguised herself as an older woman, to learn firsthand how the elderly experience their lives.

Now named one of the world’s “40 Most Socially Conscious Designers” by ID Magazine, she is the founder of MooreDesign Associates, dedicated to sustainability in civil engineering and urban design.

RIT continues its efforts to serve a diverse population, offering sign-language interpreters for the 9% of Rochester students who are deaf.

Montana Tech of the University of Montana (Butte, MT)

Montana Tech’s focus is on the mining and processing of minerals.  Their motto, De Re Metallica (“On the Nature of Metals,”) is taken from the classic 16th-century book on mining.

Naturally enough, their football team is the “Orediggers.”

And MT graduates have a median starting income of $71,000.

This means the ROI for education at this engineering program is among the best in the country – you would make back 3x your in-state tuition for four years with just one year of work!

Both the Wall Street Journal and the Washington Post have declared an MT degree to be a remarkable return on investment, far outperforming big-name schools like Harvard and Yale.

Its main campus is in Daytona Beach, Florida, conveniently adjacent to the Daytona Beach International Airport.

The Prescott, Arizona campus is the site of Embry-Riddle’s Aerospace Experimentation and Fabrication Building; it also provides $60,000 in annual grants, to support student participation in design and research competitions.

Students who cannot attend a traditional residential campus now have the option of 130 learning locations around the world, and an extensive online program.

The university’s degree programs span the breadth of aviation: from air traffic control and flight training, to engineering and crash investigation.

Its alumni include multiple astronauts and Air Force generals.

They also include such luminaries as Dr. Moriba Jah, who served as a spacecraft navigator on five separate unmanned Mars missions for NASA’s Jet Propulsion Laboratory.

LTU was established during the Great Depression, not long after Embry-Riddle.

Its motto, “Theory and Practice,” expresses a similar mission: to prepare students for an America rapidly transformed by technology.

LTU alumni created many of the aspects of modern life that we take for granted.  John W. Laister created the distinctive design of modern cargo planes, with high-placed wings and a rear loading ramp.

Among its facilities is the Center for Innovative Materials Research, launched with an $11 million grant from the U.S. Army.

Among its large-scale testing equipment is a laboratory furnace that can heat a 32,000-pound load to 1000°F in five minutes.

Dr. Nabil Grace uses the furnace to develop carbon fiber as a replacement for steel rebar in reinforced concrete.

He is currently developing projects for several highway bridges based on his work.

Founded in 1997, Olin College of Engineering is the youngest institution on this list – and the most innovative in its approach to education.

Its teaching philosophy proceeds from a vision that all knowledge constitutes a unified whole.

Courses are taken as integrated blocks: a freshman taking calculus, physics, and engineering will find that the three classes examine the same material from different perspectives.

Real world problem solving is a distinctive and pervasive aspect of Olin’s curriculum.  As freshmen, students take the “Design Nature” class, in which they design and build toys based on biomechanical principles.

By the time they are seniors, they are ready for capstone courses in which students are hired to carry out engineering projects for corporations and non-profits.

True to its philanthropic roots, Olin provides abundant scholarship money for its students.

Admission is need-blind, and all students are eligible for a merit-based scholarship that covers more than half their tuition for eight semesters.

Located just across the Hudson River from Manhattan, Stevens Institute of Technology is one of the oldest engineering schools in the United States, with a long history of accomplishment.

Prominent alumni include Frederick Reines, who received the 1995 Nobel Prize in Physics for the discovery of the neutrino.

His work has led to an entirely new field of astronomy, which uses the ghostly particles to probe the innermost depths of stars.

Gerard Joseph Foscini’s work on multi-antenna wireless communications was instrumental in the development of modern technologies such as 4G.

Fully a quarter of Stevens’ students are members of its extensive Greek system.

This includes social fraternities and sororities, as well as multiple academic societies, such as the Tau Beta Pi and Sigma Xi science and engineering societies.

Employers have noticed: unbelievably, 96% of the Class of 2016 was able to secure either a job or admission to graduate school within six months of graduation.

Founded in 1865, Worcester reinvented itself a hundred years later under the guidance of then-president Harry P. Storke.

His “WPI Plan” for engineering education proved so successful that in 2016, the National Academy of Engineering awarded the school its Bernard M. Gordon Prize for Innovation in Engineering and Technology Education.

What is the WPI plan?  Worcester students engage in hands-on, project-based education beginning in their freshman year.

As seniors, they complete an Interactive Qualifying Project (IQP), forming interdisciplinary teams to solve real-world problems on campus, in local communities, and around the world.

For one such project, WPI students traveled to Namibia to study waste recycling processes.

After interviewing local waste collectors, they determined that the collectors would make more profit if they processed recyclables on site.

In partnership with the Namibia University of Science and Technology, they are now working to develop a solar-powered shredder for plastic and aluminum waste.

Tennessee Tech is one of the foremost universities for engineering in the country. In addition to excellence in traditional STEM education, Tennessee Tech also has a remarkable and noted program in cybersecurity.

They have also been awarded a $4 million grant from the National Science Foundation, to launch a CyberCorps program that provides full scholarships to students majoring in cybersecurity.

The center’s director, Dr. Ambareen Siraj, believes that cybersecurity should be woven into the fabric of every computer science course.

She has been active in transforming cybersecurity education at Tennessee Tech, and has organized a series of Women in CyberSecurity conferences, to address the gender gap in that field.

Like cybersecurity, nanotechnology has recently moved from science fiction to reality.  It is now revolutionizing everything from clean energy and medical implants to the auto industry and hair dye.

Louisiana Tech is a leader in that field: in 2007 they became the first institution in the world to award an undergraduate degree in nanosystems engineering.

Louisiana Tech isn’t just for aficionados of the tiny, however.

They also offer a solid education in more traditional fields such as mechanical, chemical, and electrical engineering.

Students show off their skills by competing against 14 other schools in the annual Deep South Regional Conference of the American Society of Civil Engineers.

In 1957, the Soviet Union shocked the world by launching Sputnik, the first artificial satellite.

In that same year, Florida Institute of Technology was founded to prepare students for the new Space Age.

To give just one example, Felix Soto Toro was born in the poor neighborhood of El Barrio Amelia in Puerto Rico.

He worked his way to Florida Tech, earned an undergraduate degree, and immediately began working for NASA upon graduation.

At that time, large payloads were loaded into launch vehicles using a crane, but high precision was needed to prevent potentially disastrous collisions.

Technicians holding meter sticks would measure the position of the payload by hand, and shout instructions to the crane operator.

Today, Florida Institute of Technology stands among the most impressive schools in the country with a major focus on science, technology, and engineering.

These are our picks for 10 amazing engineering schools just as good as the Ivy League.

In fact, some of these schools have even better ROI than the Ivy’s themselves have.

This list is based on the editorial opinion of College Gazette, Inc.

What other amazing schools for engineering do you know about? Let us know in the comments.

The Best Engineering Schools in the World 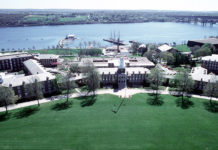