When you think of Ivy League schools, Georgetown University might come to mind.

Georgetown overlooks the Potomac River from the top of a hill in Washington, D.C. The tall neo-Gothic walls of Healy Hall, a National Historic Landmark, have stood watch as generations of Georgetown students — including former president Bill Clinton and Supreme Court justice Antonin Scalia — graduated and went on to influential positions in public service, business, law, and beyond.

It is consistently placed at the top of U.S. college ranking lists, particularly the school for international affairs. Proximity to our nation’s capital puts Georgetown at the center of the political world.

There are many other reasons why Georgetown is Ivy League caliber. In this article, we’ll break down exactly what it means to be Ivy League, where Georgetown fits in, the school’s various rankings, and how to get accepted.

Is Georgetown an Ivy League School?

Georgetown is not an Ivy League school, but it is often considered on a par with the Ivies.

The Ivy League is made up of Harvard, Yale, Columbia, Dartmouth, Brown, University of Pennsylvania, Cornell, and Princeton — all private institutions. They began as a prestigious athletic conference nearly 70 years ago, but have since evolved into academic and research powerhouses. Their endowments are the largest in the world, and they have become the most recognizable brand name in education.

Likewise, Georgetown is an elite private school with stellar athletic and academic programs. In fact, it’s one of the best places in America to earn a degree in global studies or political science.

Of all its athletic programs, men’s basketball has gained the most renown: it has won eight Big East Tournament Championship titles, and has made 31 NCAA Division I Tournament appearances. Famous players include current coach Patrick Ewing, Dikembe Mutombo, Allen Iverson, and Alonzo Mourning Jr.

Other famous alumni go on to high-ranking roles in both public and private sectors. They include Senate majority whip Dick Durbin, former Secretary of Defense Robert Gates, and Federal Reserve Chairman Jerome Powell.

Why Georgetown is Often Confused as an Ivy League School

Georgetown is often confused as an Ivy League school because of its highly selective acceptance rate: 14%.

That’s a smidge higher than the least selective Ivy League — Cornell — but all things considered, Georgetown is definitely an Ivy-level school without the branding.

Other schools in this category include MIT, Stanford, Caltech, and Duke. It’s no tragedy to get accepted to one of these schools instead of an Ivy.

The same goes for Georgetown. It’s a “leading research university with a heart,” referring to its Jesuit Catholic roots. In fact, founded in 1789, it’s the nation’s oldest Catholic college. Its core values are social justice, relentless inquiry, and respect for one another’s unique needs and skills.

But the majority of students today aren’t Catholic. Georgetown has grown into a leading institution for foreign service, politics, theater, business, and more. Its endowment isn’t as substantial as the Ivies, but that doesn’t stop the best and brightest from flocking to Georgetown to learn and work.

Georgetown alumni are also high achievers. Among them are 27 Rhodes scholars, 33 Truman scholars, and 429 Fulbright scholars. Due to its focus on international relations, the school has produced more U.S. diplomats than any other university, educating 2 U.S. presidents, 2 Supreme Court justices, and numerous foreign leaders and royalty.

Where is Georgetown Ranked Among All Schools?

U.S. News ranks it #23 among national universities, but it’s in the top 10 for veterans and service-learning. Bottom line: Georgetown takes care of those who take care of others.

Washington Monthly, notable rival of U.S. News, ranks Georgetown even higher at #8. This makes sense considering WM prioritizes colleges based on “their contribution to the public good in three broad categories: social mobility, research, and promoting public service.” Even some Ivy Leagues (Columbia, Cornell, Dartmouth, Brown) do not rank as high. Georgetown also ranks second — only after Stanford — in WM’s social mobility ranking.

In addition to using academic and financial data from the U.S. Department of Education, Niche.com considers student and alumni reviews in their rankings, where Georgetown ranks #25 overall. However, Niche.com names it the #1 place to study international relations, the #2 best Catholic college, and #3 in both political science and accounting/finance.

Despite the different rankings, a common thread through all these publications is that Georgetown students are in elite company. In a country with some of the best schools in the world, being in the top 25 is certainly not a bad place to be.

How to Get Accepted Into Georgetown

Given the competitive nature of applying to Georgetown, your application will need to stand out in a number of ways.

First, have a GPA of around 4.01. If you take the SAT, aim for at least 1450; for the ACT, try for a 33. If you fall slightly lower in one of these areas, a higher score in another can help “make up” for it. For example, if you have a 3.9 GPA, you may still be competitive with a 1550 SAT score. Of course, the higher your grades and test scores, the better.

If you score lower in both grades and test scores, don’t despair just yet. College admissions officers look at other parts of your application, too.

Extracurriculars and Letters of Recommendation

Extracurriculars are a vital part of your application, but make sure they relate to your unique interests and passions.

For example, if you plan to major in political science, demonstrate that passion by highlighting your Model UN participation or victories in speech and debate competitions. Write about your involvement in student body politics and any other significant leadership position you’ve held. The more passion and achievement you show through your extracurriculars, the more willing admissions officials will be to overlook slightly lower numbers.

Also, submit a letter of recommendation from a teacher who can vouch for your personality and passion, using specific examples to illustrate why you’d be a good fit for Georgetown. Bonus points if it’s a teacher in your preferred field of study. Going off the prior example, it would mean even more to Georgetown to see a recommendation from your speech and debate coach or government teacher.

Finally, since Georgetown is a service-oriented school, having an application brimming with community service experience will boost your chances. At the same time, make sure you’re not just ticking boxes. Shoot for quality over quantity.

Recap: Georgetown is NOT an Ivy League School, However, It is a Highly-Ranked Private University

Although Georgetown is not in the Ivy League, it remains one of America’s

As discussed, the Ivy League is a brand name synonymous with elite academics, research, and athletics, but that doesn’t mean a non-Ivy can’t also have these things. In fact, Georgetown ranks higher than many other Ivies on some college ranking sites, like Washington Monthly.

Thus, it’s easy to mistake Georgetown for an Ivy League. Like Ivy alumni, Georgetown graduates go on to careers in high office, from the Federal Reserve to the White House. Many continue their graduate education on prestigious Fulbright, Marshall, Truman, and Rhodes scholarships. And when they do enter the workforce, their starting salaries are considerably higher than the national average.

So even though it isn’t an Ivy, it’s as much if not more of a privilege to get into Georgetown, especially if you plan to study international affairs, business, or politics. Going to school near Washington, D.C. will put you in the center of all the action.

How to Get Into an Ivy League School

Is UCLA Ivy League? Ranking, How to Get In, and More 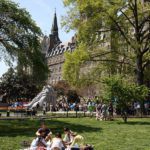