Turn on any major news station, and you will hear endless discussions about the rising cost of student loans and tuition at America’s top colleges.

All this conversation is important. After all, top private universities are now costing families upwards of $6,000 a month, every month, for four years straight!

Believe it or not, there are actually quite a few schools that don’t charge tuition.

For this list, we are only including four-year Bachelor’s degree-granting non-military institutions.

Six of the schools are premiere liberal arts colleges…

And two are actually colleges dedicated entirely to music.

So what programs are tuition-free for admission?

First on the list is Alice Lloyd College, an institution of approximately 600 students based in Kentucky.

So why is Alice Lloyd free? Like three other schools on this list, it is considered a “work” college.

A work college is a school where work is an integral part of the educational experience. Students are employed by the school as office assistants, tutors, craft makers, and even as maintenance.

Such an arrangement not only makes it possible for students to study at Alice Lloyd for free, but also provides students a solid work ethic helping them succeed post-graduation.

Although the school is tuition-free, students must be residents of Central Appalachia to receive the financial benefits.

Barclay College is a free tuition college best described as a Quaker school. Most known for awarding ministry degrees, the entire student population at Barclay is just 200 students (approximately).

With an acceptance rate of over 60%, Barclay is perhaps the most admissions-friendly free tuition college in the entire nation.

Majors at the school include Youth Ministry, Pastoral Ministry, and Worship Arts. These Ministry majors are what most students choose to study at Barclay. However, the school does offer a degree in Business Administration as well.

Spiritual growth is the core of the Barclay experience.

It is the excellent funding of Berea, combined with its “work college” requirement –  in which all students of the school must have a job on campus to graduate – that allow it to be completely tuition-free.

Berea has a notable history. It was the first school in the entire Southern United States to be integrated racially and coeducational.

It is also one of the top 50 most best liberal arts colleges in the country, according to US News.  Washington Monthly ranked it #4 in 2019. Here Are the 10 Best HVAC Schools

The 10 Best Video Game Design Schools in the US

The 10 Best Creative Writing MFA Programs in the US

The 10 Cheapest (Most Affordable) Colleges in the US

The Best ROTC Schools and Programs in the US 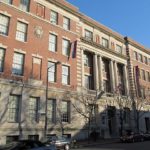