The country’s best screenwriting schools are as diverse as the stories their students tell.

Screenwriters are the creative men and women who craft the stories that get turned into TV series, movies, and digital media.

While some colleges and universities offer bachelor’s degrees in screenwriting, the nation’s current top screenwriting programs all offer a Master of Fine Arts in the field.

Students don’t have to study in entertainment hubs like New York or Los Angeles, either. Many of the best screenwriting programs are spread throughout the U.S., but no matter where they go, students often have opportunities to spend time in major industry areas to network and/or intern at some point in their studies.

As the world shifts to more remote learning opportunities in the wake of the coronavirus pandemic, some schools also offer low-residency programs in which most of the program takes place online.

Both undergraduate and graduate students complete a wide range of scripts and other portfolio pieces, allowing them to enter the competitive entertainment industry with loads of experience and writing samples to help them land work.

Here are the 10 best screenwriting schools in the US.

Stephens College students spend part of the studies where the magic happens: Hollywood.

The college offers a Master’s of Fine Arts in TV & Screenwriting, a two-year program that mixes online courses with four 10-day workshops at the Jim Henson Studios in Hollywood.

Stephens also is making a concerted effort to give female writers more opportunities to work in mainstream Hollywood, and its students hone their crafts under the guidance of “some of the best working writers in the industry.” Faculty and mentors include successful entertainment professionals who have earned Oscars, Emmys, and other awards.

Additionally, Stephens connects its students to showrunners, agents, and other executives to help them understand the process of selling their writing. Alumni have gone on to work for such shows as “13 Reasons Why” and “Seal Team.”

Prospective students must include a writing sample with their application. This can be for a screenplay, television pilot, web series, or stage play.

Located in the heart of Southern California, Pepperdine is able to bring in Hollywood professionals to teach and nurture its screenwriting students.

Pepperdine’s Master of Fine Arts in Writing for Screen and Television is a two-year program that includes courses looking at film history and storytelling, which teach students how to write for sitcoms, dramas, documentaries, and more. Students have the chance to participate in writing workshops with Hollywood professionals to help them further develop their skills.

MFA candidates must complete an industry internship as well as a thesis, which can be screenplays, television pilots, teleplays, or a combination of works.

To apply, students must include three essays as well as a sample of a television script or feature screenplay that is at least 25 pages. Nonfiction and pieces of journalism will not be accepted.

8. University of North Carolina School of the Arts (Winston-Salem, NC)

The University of North Carolina has both undergraduate and graduate screenwriting programs.

In the bachelor’s program, students spend two years learning fundamentals of the entertainment industry, such as screenwriting and directing, and gain hands-on experience in workshops. If faculty members approve their portfolio, the students officially enter the screenwriting program in their junior year. The final two years of study involve honing more specific screenwriting skills, developing career strategies, and drafting scripts and screenplays for potential real-world production.

UNC’s Master of Fine Arts in screenwriting program lasts two years and has class schedules geared to accommodate working professionals. Students meet weekly with their mentor to develop a professional writing portfolio and are encouraged to collaborate with other campus programs on projects.

Students can hear from guest artists through special programs like workshops and screenings, but they also can participate in a university trip to Los Angeles, where they will go behind-the-scenes and meet with people working in the entertainment business.

Graduates of Boston University’s Master of Fine Arts in screenwriting program come away with at least seven professional writing projects that help them show their range.

The program also immerses students in the center of the entertainment industry during their fourth and final semester. After spending the earlier part of the program in Boston, students head to Los Angeles, where they intern in the industry, network with fellow BU alumni, and polish a script they started earlier in their studies.

All the while, students learn from industry veterans and can even gain some teaching experience themselves through graduate assistantships.

Students pursuing the Master of Fine Arts in Writing for Film and Television at Emerson take 100% of their classes online.

The university only requires the students to visit campus for a six-day residency at the start of each semester. Students alternate between Emerson’s Boston and Los Angeles campuses for the residencies, where they can attend screenings, seminars, pitch sessions, and more to give them a feel for the entertainment industry.

The two online classes students take per semester are asynchronous, although there will be occasional synchronous workshops, and they focus on subjects such as film and television genres and television series writing. Students graduate with a portfolio that includes a wide array of writing samples, including screenplays and television scripts.

Emerson does not require applicants to submit GRE scores, but they do need to submit a sample of either screenwriting, dramatic writing, or a combination of those.

Writers can pursue their passion through two undergraduate programs and two master’s programs at Chapman University.

The Southern California university has bachelor’s degrees in screenwriting as well as television writing and production. Students in the screenwriting program come away with at least two feature-length scripts and have opportunities to work with other film majors and meet with experienced entertainment industry professionals.

At the graduate level, students can pursue Master of Fine Arts in screenwriting or television writing and production, both of which take two years to complete. Students build portfolios while learning more advanced concepts, like about the business side of the industry or how to develop a TV series.

The New York Film Academy has screenwriting programs for practically every level of study, putting students of all kinds to work in one of the entertainment industry’s capital cities.

The academy offers online screenwriting courses (a 15-week class, a four-week class for beginners focusing on television pilots, and a four-week class concentrating on story and structure). There also is a Final Draft Certificate Program for script coordinators held on weekends.

Moving up from there, students can get a more in-depth experience through one-, eight-, and 12-week screenwriting workshops. The academy designed these intensive and fast-paced programs for people with little or no screenwriting experience.

Then come the degree programs, with associate, bachelor, and master degrees in fine arts that focus on screenwriting available at the academy’s Los Angeles campus.

This Ivy League university combines its screenwriting program with directing, positioning its students for a variety of careers after their graduation.

Columbia’s Master of Fine Arts in screenwriting/directing gives students a well-rounded look at the entertainment industry, from courses in the history and practice of filmmaking to lessons about the technical aspects of writing and directing careers.

The university aims to prepare its MFA students for careers in television, film, and digital media through two years of classes and hands-on work that often ends up winning students awards. Students complete a variety of script and film projects before finishing their studies with a thesis and research.

UCLA’s esteemed school gives graduate students a chance to focus on and refine their screenwriting skills through its Master of Fine Arts.

The screenwriting program has produced a bevy of illustrious, successful alumni, including Francis Ford Coppola and Alexander Payne. Its faculty also have years of experience in the entertainment industry and are able to pass on their knowledge to the next generation.

Students focus their studies on a feature film or television writing (although they can take workshops in both fields) and complete the program in two years with a thesis portfolio.

Prospective students will, however, need to show UCLA they have what it takes to get into the program first. Their application must include a creative portfolio that includes either all or part of a feature-length screenplay, a drama series pilot, or two comedy/dramedy scripts.

USC’s cinema program has produced numerous industry leaders through the years, and aspiring writers can find a home in its John Wells Division of Writing for Screen & Television.

The division offers both bachelor’s and master’s degrees in fine arts that focus on screenwriting as well as a screenwriting minor for undergraduates.

The bachelor’s program is highly selective, however, admitting just 30 students each fall. Those who make it in enjoy small class sizes and workshop-style courses. Students also hear from guest speakers and can get hands-on industry experience with high-level internships.

USC students who want to understand the basics of screenwriting and produce some scripts themselves can take the minor in screenwriting. They must complete 16 units (aka credits) to earn the minor.

At the graduate level, students also engage in internships and mentorships available thanks to USC’s “close links to the Los Angeles film industry’s top screenwriters, directors, production companies and studios,” according to the university. The two-year program admits just 32 students each fall. 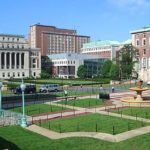