Without question, people go into nursing to help others, heal the sick, and improve the wellness of the population. But, it doesn’t hurt that nursing is among the most stable and well-paying careers. According to the U.S. Bureau of Labor Statistics, the demand for nurses will grow by 7% over the next year, and those with nursing degrees average a salary of $75,300.

Nurses are compensated well because they serve a vital role in society. More than even doctors, nurses do hands-on work with patients, caring for them, coordinating with family, and prepping physicians.

But such an important job means one must take their preparations seriously. It’s vital to choose the right school to study nursing.

For that reason, some might skip over Las Vegas when choosing a place to study. After all, while most states and major cities have several nursing schools in the area, Las Vegas offers only one, the University of Nevada, Las Vegas School of Nursing.

But that one school is so impressive that it competes with the best in any area. With a beautiful 332-acre campus, UNLV features a comforting learning environment and access to one of the most exciting cities in the world. Additionally, the school has a $305 million endowment, which it uses to advance research in fields such as nursing.

Not sold yet? Well, don’t worry, because there’s a lot more to learn about studying nursing at UNLV Nursing. In this article, we cover all of the benefits that the school offers its students, and then we’ll give some advice on getting accepted into their program.

The flagship school in the Nevada university system, UNLV was established in 1957 as a public land-grant institution. Ranked as a tier-one research school, UNLV has a reputation for cutting-edge developments and excellent faculty, especially in the sciences. Working with an $83 million endowment for research in the sciences, the school pushes forward to new discoveries and methods.

That’s especially true of the UNLV’s medical program, which works in conjunction with the University Medical Center of Southern Nevada. The 18th largest public hospital in the United States, UMC features a number of resources to aid students in the medical field. In addition to a level 1 trauma center, the facility has the state’s only burn care center, the largest HIV care center in the state, an adult and pediatric emergency department, and much more. When combined with the city’s vast tourist network, the hospital sees patients from all over the world, allowing students to study all manner of scenarios.

All of these resources are a boon to those in the nursing program. The program began in 1965 with an inaugural class of 27. Over the decades that followed, UNLV Nursing has pursued its goal of educating nurses to promote, improve, and sustain human health through evidence-based education and advances in research and practice. Offering Bachelor’s, Master’s, and Doctorate degrees in nursing, the school gives future nurses the skills and knowledge they need to care for their patients.

In addition to the University Medical Center, UNLV Nursing offers several resources to improve their student’s abilities. The 31,000 square-foot Clinical Simulation Center of Las Vegas allows students to learn and develop their skills using low and high-fidelity manikins, standardized patient interactions, simulations, and surgical labs. In the center’s five simulation rooms, students work in a recreation of specific hospital environments, including an emergency department and a delivery room.

High-tech manikins give students practice in taking vital signs and practicing key soft skills, such as professional communication, team management, task performance, and decision making. Faculty and staff monitor students through a two-way mirror, observing their actions and making alterations to the simulated patients, to better recreate real-world situations. The faculty can record sessions in the simulation center and use them in later teaching discussions.

UNLV Nursing builds interest among future generations by holding its annual Nurse Camp, in which junior and senior high school students participate in one of two week-long sessions. During these sessions, students are exposed to academic, clinical, and community activities, which develop realistic expectations about nursing school and working as a registered nurse.

By focusing on these elements, the school’s nurse researchers work within the context of influences relevant to individuals trying to achieve their best health. Across the school of nursing, UNLV’s research addresses all domains of influence, from biological studies of hormones and stress makers to population-level studies of the organization of our health system.

Not only does the school’s research program look toward the future of nursing education, but it focuses on health issues associated with an urban environment. Currently, UNLV provides active grants to faculty working on essential topics such as the effect of hypobaria on muscle inflammation and regeneration after injury and hemorrhagic shock or the Baaniilaa Project, which improves chronic illness management in the Crow Nation.

With so many resources, it’s no surprise that UNLV Nursing has high standards. Only 73 of the 218 applications last year were given offers of admission, for an acceptance rate of 33%.

How to Get Accepted

With such a low acceptance rate, those who hope to study at UNLV Nursing must be strategic when filling out their applications. Of course, future nurses should work to earn high grades in their science courses and strive to have a high GPA. But admissions to UNLV Nursing, or really any reputable school, isn’t just a numbers game. Admissions counselors want well-rounded students in their program, not just those who can do well on exams.

To ensure that they receive those types of students, UNLV Nursing’s admission committee looks at more than just grades and test scores. Future students must apply to the pre-nursing program at UNLV or must consult with an advisor to have credits from another program transferred over to this new course of study.

In addition to a basic application, UNLV Nursing also requires additional material. While this might seem like an unnecessary redundancy, the additional material does in fact work in the favor of most students. With these materials, an applicant has even more chances to stand out and show the school the well-rounded student they could be.

In particular, the school requests letters of recommendation. Most know that a strong letter of recommendation should come from a professor who is respected in their field, but that’s not all of it. The recommender should not only be able to speak to your strengths and abilities (in other words, don’t ask for a letter from a professor who gave you a B in their class) but also should be someone who knows you well.

To secure a good letter of recommendation, one should start early. Figure out which professors have strong reputations in the field into which you plan to enter and take steps to work with them. Take several classes with them and volunteer with them to establish a working relationship. And of course, be sure to earn good grades in their classes.

Letters of recommendation speak to your abilities and characters more than any other part of the application. But with good grades and a strong letter, you’ll have the best chance of being one of those rare people who get accepted into the UNLV School of Nursing.

The 10 Best Nurse Practitioner Schools in the US

The 10 Best Nursing Schools in Canada

The 10 Easiest Nursing Schools to Get Into 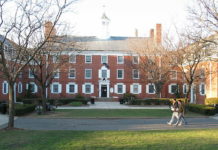 Here Are the 10 Best Nursing Schools in New Jersey

The Best Nursing Schools in Colorado

The Best Nursing Schools in Arizona