Although attending an Ivy League school can significantly boost a student’s resume, many schools are equal – or better – in their offerings and academic prowess.

Many schools are often mistaken as Ivy League schools, including Duke, Northwestern, Vanderbilt, University of Chicago, and several more.

Why are these schools not in the Ivy League? For one, it actually has nothing to do with the quality of the school. Rather, the Ivy League is simply an athletic conference comprised of eight schools established in the 20th century.

Indeed, the Ivy League is renowned for being one of the most prominent university networks in the United States. At the same time, many top-tier universities don’t belong to the Ivy League. These schools are nevertheless home to compelling degree programs, accomplished faculty, and the abundant resources students expect from a world-class institute of higher education.

Today, we are going in-depth on the 10 best non-Ivy League schools, as ranked by U.S. News & World Report. These are 10 programs with some of the most robust programs globally, including those in law, business, performing arts, finance, and more. Additionally, these 10 schools are also among the most selective programs in the entire world.

Without further ado, here are the 10 best non-Ivy League schools in the country.

A global leader in teaching and research, Washington University in St. Louis is known amongst students and faculty as a creative, progressive, community-minded school that is academically rigorous as well as supportive and nurturing to each student’s unique educational passions.

A place where students are encouraged to push the boundaries of learning and ask what else there is to discover, Washington University is affiliated with 24 Nobel Laureates who graduated from the school or conducted prize-winning research within its halls. There are over 90 fields of study to choose from, plus students get the unique flexibility to select courses across multiple disciplines. And, with a faculty to student ratio of 7:1, entrants receive dedicated attention from professors, many of whom are noted leaders in their field and have earned national and international honors.

Rice University isn’t just one of the very best non-Ivy League schools in the US: it’s also ranked #7 in the country for resources by The Wall Street Journal, #1 for access to race/class interaction by Princeton Review, and #1 for quality of life by Princeton Review.

Many prospective students may also be excited to learn that Rice University has a rich history of collaboration with the one and only NASA. The school is located in Houston Texas, otherwise known as Space City, USA, and 14 faculty and alumni to date have earned the distinction of serving as astronauts.

Coming in at #8 for the nation’s top colleges outside of the Ivy League, Vanderbilt University is recognized around the world for its distinguished faculty, robust research funding, and plentiful academic resources. Indeed, Vanderbilt is often referred to as being a part of the “Southern Ivies.”

As they would at an Ivy League school, students attending Vanderbilt University will find a challenging yet supportive scholastic environment where they are surrounded by like-minded thinkers. The connections students develop during their time in college can help them build an academic network that may support their professional goals far into the future.

In addition, Vanderbilt University strives to make the university accessible to every admitted student, regardless of their financial situation. This commitment has led U.S. News & World Report to rank Vanderbilt as the #9 Best Value School in the United States.

Duke University in Durham, North Carolina, is ranked by U.S. News & World Report as the #12 best U.S. school overall. These sky-high scores complement the school’s international profile as one of the best research schools in the country, all of which comes down to Duke University’s outstanding track record of education, innovation, and student success.

Many students are attracted to Duke University for the opportunity to become a part of the school’s rich heritage – dating all the way back to 1838 – and distinguished modern legacy. Notable alumni throughout the years include Nobel Prize winners, Olympic medalists, heads of state, entertainers, journalists, and leaders of every stripe – from Apple CEO Tim Cook, to former U.S. Senator Elizabeth Dole, to comedian and TV actor Ken Jeong.

U.S. News & World Report gives Northwestern University a ranking of #9 in the nation for colleges overall. What sets Northwestern apart is its commitment to excellent teaching and high-impact research, all taking place within a welcoming university community where diversity and inclusion are paramount.

Northwestern likes to emphasize that within its walls, there’s no such thing as a one-size-fits-all approach. The school’s current students and past alumni show what this philosophy looks like in practice.

Past graduates include astronauts, Pulitzer Prize-winning authors, jazz composers, U.S. District Court judges, and many more. What ties together Northwestern’s diverse alumni, faculty, and students is their drive to work hard and make extraordinary contributions to their community and the world.

With a remarkable scholastic heritage dating back to 1876, John Hopkins University is also ranked by U.S. News & World Report as the #9 school in the country.

John Hopkins University was the first research university established in the United States – but its modern accolades are equally impressive as its historic legacy. John Hopkins is a prominent destination for science, medicine, and public policy students, with its Bloomberg School of Health reigning as the country’s #1 public health school for more than 20 years.

In addition, John Hopkins is home to equally strong programs across arts and sciences, business, music, and more: all offering top-notch classroom and research opportunities, not to mention outstanding faculty who spend every day helping driven students to excel.

Completing the three-way tie for #9 school in the nation is the California Institute of Technology, more commonly known as Caltech, as ranked by U.S. News & World Report.

Caltech is probably most well-known for its exceptional science and engineering programs, where students conduct groundbreaking research in medicine, technology, astronomy, and much more.

The small student body comprises under 1,000 undergraduates and just over 1,200 graduate students, with an impressive student to faculty ratio of three to one. The university’s faculty, students, and alumni are recognized worldwide for their innovative work: 44 Nobel Laureates, 42 MacArthur Fellows, and 64 National Medical of Science recipients are associated with Caltech.

The school was founded by John D. Rockefeller and counts 92 Nobel Prize winners across its history, including six current members of faculty.

Students who attend University of Chicago will experience an enriching core curriculum of interdisciplinary study, as well as engage in challenging, innovative work within their chosen major. Academic programs include arts, engineering, education, and medicine. Whichever degree path students elect to take, they will benefit from a faculty of scholars, scientists, and researchers, all working hand-in-hand with students to empower their academic exploration and success.

Tying the University of Chicago for the #6 overall ranking in the nation by U.S. News & World Report, Stanford University is among the world’s most desired colleges. A preeminent institution in driving new ideas and discoveries for over 125 years, Stanford University prepares students to take their place as leaders, thinkers, and doers in a world that doesn’t sit still.

The community of scholars at Stanford University currently comprises 19 Nobel Laureates, four Pulitzer Prize winners, and two Presidential Medal of Freedom recipients. Alumni of the school are as diverse in their fields as they are exceptional in their achievements, with distinguished figures like Supreme Court Justice Sandra Day O’Connor, actress and producer Reese Witherspoon, and Yahoo! Inc. co-founder and former CEO Jerry Yang naming Stanford University as their Alma Mater.

The #1 non-Ivy League university in the United States, Massachusetts Institute of Technology (MIT) is responsible for accelerating the inventiveness and drive of talented students who regularly go on to become inventors, entrepreneurs, and exceptional leaders of all stripes.

Science and technology are the key areas of focus at MIT – but that’s not to say that art and creativity don’t have a key role to play in how students learn. Indeed, MIT is known for imbuing pupils with not only a comprehensive foundation of intellectual knowledge, but also the lateral thinking skills to imagine what else is possible. Perhaps this is why MIT graduates are consistently recognized for their global impact, to the extent that alumni-formed companies produce annual revenues on par with the GDP of the world’s 10th largest economy. 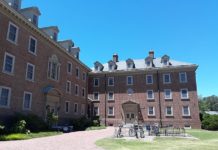