South Carolina is a beautiful coastal state in the Southeastern United States that also happens to be home to two of the country’s top-ranked law schools.

What makes a law school well-respected? What earns a law school a spot on US News and World Report’s illustrious rankings? Some of the key metrics that influence the rankings are ABA accreditation, percentage of students who pass the bar the first time, school resources, job placement success, and quality of student-faculty interactions, not to mention the law school’s reputation among its peer institutions. All of these factors and more combine to create a comprehensive ranking system that helps prospective students, employers, and the general population understand how different programs stack up next to one another.

The two top-rated law schools in the state of South Carolina are the Charleston School of Law (#147-193) and the University of South Carolina (#96). In this article, we will walk through what makes these law schools distinctive, how they measure up to one another and to other law schools in the country, what kind of LSAT scores and GPA they require for admission, and how successful their graduates are at passing the bar exam, gaining full-time employment, and making an impact in the world.

Charleston School of Law (CSOL) is located in – you guessed it – Charleston, SC, and is a for-profit institution established in 2003 by a group of local attorneys and judges and fully accredited by the ABA in 2011. This makes it a relatively young law school compared to others across the country. Public service is woven into the fabric of the program, such that every student must perform at least 50 hours of public service to graduate.

As a relatively newly established, for-profit law school, CSOL faced some challenges in becoming ABA-accredited. This accreditation is critically important because in the state of South Carolina, only students who have graduated from an ABA-accredited institution can sit for the state bar exam. After gaining full accreditation in 2011, CSOL was in 2020 found to be in noncompliance with a critical requirement for ABA accreditation: the requirement that at least 75% of students who take the bar must pass within two years of graduating. As of February 2021, CSOL is now in compliance with this requirement.

CSOL is known for having exceptionally dedicated professors and a small student-to-faculty ratio. When Dean Larry Cunningham joined the CSOL administration in 2020, he commented, “I am impressed by the faculty’s commitment to students and effective teaching. And the students are energetic, thoughtful, and committed to using their education to serve the greater good.” Indeed, the “greater good” is at the heart of everything CSOL does and inspires its students to do. Its motto is pro bono populi, “for the good of the people”, and the 50-hour public service requirement per student means that the law school has, as a whole, provided upwards of 500,000 hours of public service.

In terms of admissions selectivity, CSOL accepts approximately 55% of applicants. Successful applicants have a median LSAT score of 151 and a median GPA of 3.19. The majority of incoming students come from outside of South Carolina, and nearly 75% of the incoming class receives some form of financial aid, with the average merit scholarship totalling $25,000. In recent years CSOL’s first-time bar passage rate has been steadily increasing, with 52.6% of test-takers passing as of the 2021 school year.

CSOL runs three publications. The first is the Charleston Law Review, which is a traditional law review run by second- and third-year students. Charleston Law Review has secured some high-profile legal writings, such as the foreword to the Fall 2007 edition, which was written by then-Senator and future-POTUS Barack Obama. Moreover, retired Supreme Court Justice Sandra Day O’Connor was the keynote speaker at a symposium on First Amendment religious issues co-hosted by the Charleston Law Review in 2013.

The second publication at CSOL is the Maritime Law Bulletin (also called MALABU), which, as the name suggests, focuses on maritime-related legal issues and developments.

The most well-known CSOL alumnus is Nick Shalosky, the first openly gay official to be elected in the state of South Carolina. He graduated from CSOL in 2013. Shalosky notes that he “loved law school, but didn’t love practicing law” so he made a career shift and now works as a Senior Regional Director for Kaplan Bar Review, helping law school students and graduates prepare to pass the bar exam.

CSOL understands that like Shalosky, law school students can pursue many different paths with their J.D. degree. That’s why the school offers a wide range of externship opportunities and hosts a “professionalism series” that offers students real-world insights into the important role professionalism plays in the field of law.

As a public university, South Carolina School of Law provides a great value legal education to residents of South Carolina, and also offers generous scholarships to out-of-state students in order to make the program more affordable for all. And indeed, South Carolina Law attracts students from all across the country, especially since the state now utilizes the Uniform Bar Exam, so graduates who pass the bar in South Carolina can practice anywhere in the United States.

Recently, South Carolina Law School revamped its student support services and mentoring program, helping to ease students’ transition into real-world legal practice by linking them with practicing attorney mentors. Dean Robert Wilcox commented, “In the first year particularly, we introduce students to what it means to be a professional and the many roles that lawyers play in the business world and in government.”

This emphasis on professionalism and real-world experience is embedded in the South Carolina Law School curriculum and program as a whole, which offers a range of unique, hands-on opportunities, including clinics, externships, London Maymester, Capstone courses, and the Pro Bono Program.

Through the London Maymester program, students spend the month of May studying in London in conjunction with The Honourable Society of Gray’s Inn, one of the four London Inns of Court. Meanwhile, third-year Capstone courses are inquiry-based classes meant to simulate the real problems and questions graduates will face when entering legal practice. Last but not least, South Carolina Law School is home to the country’s very first Pro Bono Program at a domestic law school.

In terms of admissions selectivity, South Carolina Law School accepts approximately 46% of students who apply, and successful applicants have a median LSAT score of 156 and a median GPA of 3.51. About two-thirds of the incoming class tends to be South Carolina residents. The other third of incoming students come from other states, especially states in close vicinity to South Carolina, such as Georgia, North Carolina, and even Florida. As of 2020, the school’s first-year bar passage rate is 76.4%.

Given South Carolina Law School’s long history, it’s not surprising that many future luminaries in the fields of government, politics, and the judicial system have walked through these halls.

Among South Carolina Law School’s distinguished alumni are U.S. Senators and Representatives, Governors, Judges, State Supreme Court Justices, and more. The school has a wonderful history of educating impactful South Carolinans and continues to evolve its offerings to suit the needs of today and tomorrow.

Here Are the Best Online Law Schools in the US

The 10 Best Law Schools in Canada 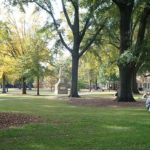