With an estimated 53,400 new jobs over the next few years, chiropractic is one of the fastest-growing medical fields. And it’s one of the most high-paying. According to the U.S. Bureau of Labor Statistics, chiropractors earn an average of $70,720 a year. With these statistics, it’s no wonder that so many students want to study chiropractic medicine.

But where is the best place to start? Unlike other medical subfields, students have many options when choosing a chiropractic school. Making things more complicated, the large majority of the schools are private and unaffiliated with larger and better-known colleges, which means that most future chiropractors can’t rely on alumni connections or name recognition when making their choice.

Today, we’ve identified ten of the best chiropractic schools in the U.S. and ranked them for you here. Each of these schools will give students an excellent education, but they all have their differing approaches. Some value hands-on experience and put students into clinics to start working with patients as soon as possible. Others take a more academic approach, requiring a bachelor’s degree and publishing scholarly journals.

Whichever approach works best for you, we’ve got it covered on this list. Take a seat and look over the options. Just don’t bend your neck in the process, or you’ll find yourself in a chiropractor’s office before you’re in chiropractic school!

Here are 10 of the best chiropractic schools in the US.

Thanks to affiliations with the National Naval Medical Center in Bethesda, Maryland and Veterans Hospitals across the nation, New York Chiropractic College has some of the most successful alumni in the field. Olympic weightlifter turned doctor of chiropractic medicine Karyn Marshall and Ballet Arizona resident chiropractor Paul Frame both entered the field after studying at NYCC.

Despite these successes, NYCC continues to expand and grow. Just last year, the school entered a partnership with the city’s Bridge to Life Center, helping addicts on their way to recovery. Students can also gain experience while working in one of three clinics in cities throughout the state.

Those looking to pursue research agendas can participate in one of many programs NYCC conducts related to chronic lower back pain. The school also hosts the first chiropractic biomechanical research laboratory in the nation.

The school is aided in that mission by a recent $100,000 grant from the NIH for humanities-based healthcare. To this end, students studying chiropractic medicine not only learn about the technical elements of their field but also treatments for the whole person.

This approach has not lessened the effect of their technical training. Over the past four years, 88% of the school’s graduates passed all parts of the NBCE Exams within six months of articulation.

Dating back to 1922, Cleveland University – Kansas City can trace its origins to the first families of chiropractic, Drs. C.S. and Ruth Cleveland. Under the leadership of their grandson Dr. Carl S. Cleveland III, the school continues that tradition by innovating in the field.

CUKC’s most important innovation may be its emphasis on hands-on experience early in the program. Students begin working with patients in the first trimester and quickly move on to serving in the university Chiropractic Health Center, the Veterans Administration Hospital, or the Kansas City CARE Clinic. Thousands of patients visit these clinics each year, giving students plenty of experience in developing their craft.

Another innovation comes in the form of CUKC’s Masters of Health Education and Promotion program. Students can complete this degree completely online, allowing them to continue their education while still meeting their work and family obligations.

NUHS extends that academic rigor to its student body, requiring a bachelor’s degree to complete its chiropractic program. This requirement leads to a higher success rate on required board and licensure tests. In addition to these bonafides, NUHS offers partnerships with the Cook County Hospital System, in which students get hands-on training working with a wide variety of patients and needs.

As these details show, NUHS leads the field in training academically gifted and technically prepared chiropractors.

University of Western States (Portland, OR)

Founded in 1904, the University of Western States was the first school to bring chiropractic care to the southwest. In its over 100-year history, UWS has trained some of the nation’s most successful chiropractors, including Dr. Montserrat Andreys, founder of HEART Health Care for Artists, and Dr. Rebecca Bell, team chiropractor for the Portland Thorns FC and the Portland Timber FC.

The success these and other students have found attests to the power of the school’s motto, “For the good of the patient.” In every aspect of their curriculum, UWS advocate for integrated healthcare, which attends to the needs of the whole patient.

One of the best examples of this commitment is the Student Alliance for Integrative Medicine (SAIM). Comprised of student-governed organizations in health schools across the state, SAIM gives students leadership in collaborating with professionals in different fields of study. As a result, they have a richer sense of their patient’s needs, allowing them to become better practitioners.

Where most of the schools on this list subscribe to mixed chiropractic diagnoses, the Sherman College of Chiropractic supports the time-honored straight vertebral subluxation-based focus. Using this approach, SCC has trained more than 3000 chiropractors worldwide.

Although SCC uses an older technique, the school is in no way stuck in the past. Each year, SCC hosts seminars and workshops to advance chiropractic research. By participating in the Lyceum conference or the International Research and Philosophy Symposium, students gain access to cutting-edge chiropractic developments while building their skills.

Those pursuing a doctor of chiropractic degree can grow their knowledge in SCC’s Center for Scholarly Activity, allowing them to participate in research studies right away. Through the center, students can partner with working doctors to test new theories and blaze new paths in the field of chiropractic medicine, meeting the needs of a new generation.

Parker University, one of Texas’s premier doctor of chiropractic programs, runs on a 10-trimester program that blends research with clinical practice. Although PU values academic excellence, it also takes into consideration hands-on experience and community service. That’s why the school offers a program that lets students work toward completing minimum requirements for admission within their doctor of chiropractic program.

That emphasis on practicality is reflected in PU’s training. Students become familiar with all four of the most common chiropractic techniques: Diversified, Thompson, Gonstead, and Activator. But PU also gives students training in business fundamentals, preparing them to start their own clinics when they graduate. With seminars in marketing and business planning, PU ensures that its alumni will succeed in both the practice of chiropractic and in running a chiropractic practice.

From an initial class of seven students in 1935, Logan University has blossomed into one of the nation’s largest chiropractic schools. As it grows, LU has taken on the characteristics of a liberal arts college, which is unusual for a special focus school. Thanks to its agreements with 52 colleges across the country, LU offers admission to its doctor of chiropractic program to those who have not yet finished their bachelor’s degree. As they complete their degree at LU, they build on their liberal arts education while specializing in chiropractic.

LU also enjoys partnerships with athletic departments at Harris-Stowe State University, Lindenwood University, University of Missouri, and Southern Illinois University, allowing students to gain real experience working on athletes. But that’s not where the similarities between LU and liberal arts colleges end, as the school has intermural athletic teams in basketball and tennis, as well as four Greek chapters.

For those who want the specialization of a chiropractic school and the benefits of a liberal arts college, Logan University is the way to go.

Like the other schools on this list, Life University features highly qualified faculty, an accredited chiropractic program, and a history of successful alumni. But it also has one thing the others do not: a great rugby team. Over the past decade, the Life University Running Eagles have regularly made quarter and semifinals and have even taken the championship two years in a row.

For those who prefer to limit their joint cracking to patients on their bed, LU has plenty to love. With a 110-acre campus, complete with over five miles of walking trails, LU is the world’s largest single-campus chiropractic college. Faculty and students regularly present at the annual Association of Chiropractic Colleges conference. In the Sid E. Williams Center for Chiropractic Research, students and faculty work to advance brain-body neuroplasticity research through clinical tests and theoretical exploration.

Whether you seek excellence on the field or in the lab, Life University has the resources to train well-rounded chiropractors.

The body is an integrated unit. The body has intrinsic self-regulating and healing mechanisms. Structure and function are interrelated. The neuromusculoskeletal system can affect, and be affected by, the functioning of other body systems.

These four statements capture the driving philosophy of the University of Bridgeport’s doctor of chiropractic program. Students learn to see symptoms not as simple stand-alone problems to be illuminated, but as part of a larger system that deserves holistic care. With an evidence-based curriculum that merges scientific study and hands-on learning, UB trains students to care for the entire body.

They can achieve this larger focus thanks to their smaller class sizes, which offer a 1:8 faculty-to-student ratio. Students also have the opportunity to earn a concurrent master’s degree in human nutrition or acupuncture.

Between their focus on students and the expansive training they offer, it’s easy to see why the University of Bridgeport is among the best in the world for chiropractic colleges.

The 10 Best Social Work Schools in the US

The Best Exercise Science Schools in the US 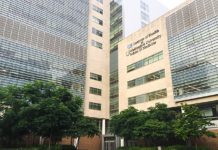 The 10 Best Veterinary Schools in the World

Discover the Best Pre-Vet Schools in the US

Discover 10 of the Best Audiology Colleges in the US