Anyone who hopes to be an actor has a lot of options for their future career. They can be stars of the stage, in dramatic performances and musical theater. Or they can that can light up screens large and small in television or film. But even the biggest star needs to start somewhere, and it doesn’t necessarily need to be in under the glitzy lights of Los Angeles.

As the home of Broadway and most of the major television studios, New York City is the premier place for actors to learn their craft. And there are plenty of options for those who come to learn, from individual tutors to lecture classes in a state school. But when it comes right down to it, anyone entering the extremely competitive field of acting needs as many tools as they can get.

And when you’re giving the acceptance speech for your first Oscar, don’t forget to thank the College Gazette.

Located in Manhattan’s Chelsea/Flatiron district, NYCDA prepares students for a career in film and television acting by studying the Meisner Technique, which emphasizes emotional preparation, repetition, and improvisation.

Although NYCDA maintains a relatively small student body of 257, resulting in an 18:1 student to faculty ratio, its 92% acceptance rate means that most who want to study there will get a chance. The $32,742 tuition might sound a little steep, but 100% of students receive some financial aid.

With a faculty that includes film and television stars such as Becky London, Neal Lerner, and Lane Binkley, the New York Conservatory for Dramatic Arts is uniquely positioned to train the next generation of acting greats.

Although it was established as a business school in 1906, Pace University has become one of the country’s premier acting schools. Pace’s Acting program grew in prominence when the popular interview show Inside the Actors Studio began recording in the school’s Michael Schimmel Center for the Arts.

Taught by industry professionals such as Julie Lawrence-Edsell and Jorge Luis Cacheiro, Pace’s acting program bills itself as “both a nurturing and rigorous environment.” Of particular interest is the unique International Performance Ensemble (IPE), which trains students in the style of ensemble theater and provides opportunities to study in the UK, Brazil, and Thailand.

The school’s downtown location earned it the 28th spot in Niche.com’s list of Best College Locations in the U.S. (and #71 on their list of Safest College Campuses in America), making Pace University one of the best places for young actors to learn their craft.

As part of the City Univesity of New York, Brooklyn College earned a reputation as “poor man’s Harvard,” with alumni that include Vermont Senator Bernie Sanders and Pulitzer Prize-winning author Frank McCourt. But its BFA in Acting program deserves particular acclaim, developing talents such as Obba Babatunde, James Franco, and Jimmy Smits.

The highly competitive accepts only 10-12 students into the program each year. But those who make it in receive personalized training, with opportunities to perform in 8-10 shows produced annually. Directors include MFA directing candidates, Brooklyn College faculty, and guest directors.

As part of a college ranked #15 in Top Public Schools and #6 Top Performers in Social Mobility by U.S. News & World Report, CUNY Brooklyn gives top-notch training for a wide range of applicants.

Founded in 1992 by producer Jerry Sherlock, the New York Film Academy trains over 5,000 students every year with all experience levels. Rather than theory, NYFA emphasizes practical experience. With a faculty of working professionals such as actors Bill Duke and Matthew Modine and directors such as Nag Ashwin and Michael Zelniker, NYFA gets its students acting on the stage and in front of the camera as soon as possible.

NYFA gives its students that experience in part by partnering with the Brooklyn and Whitney Museums, MOMA, and even NASA to create and display their work. Their special two-year musical theater program stages two main stage productions every year, equipping graduates with “numerous on-camera clips, a voiceover reel, and extensive on-screen experience.”

Some of their best-known alumni include creator Issa Rae, actor Bill Hader, and actresses Aubrey Plaza and Lana Condor. 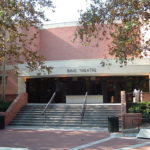